Bhubaneswar, December 10 (LocalWire) : It ‘s a sigh of relief for the suspected Bangladeshis, who were bearing with ignominious foreign national tag and were facing deportation fear for a decade-and-a-half in coastal patches of Odisha.

With the Lok Sabha passed the Citizens (Amendment) Bill (CAB), 2019 with majority votes yesterday, the Bengali-speaking inhabitants of Kendrapara district are relieved a lot with an air of expectancy and hope for secured future permeates through the air for them.

The fear of deportation continues to haunt us ever since we were asked to pack our bags on January 15, 2005, and quit the country by the then union government.

The passing of the amendment bill in the lower house has rekindled fresh hopes of citizenship being conferred on us, said 48-year-old Samir Mistry, from Ramnagar coastal village.

The bill seeks to grant Indian citizenship to Hindus who had migrated to India before December 31, 2004. We were not Bangladeshis.

But we were branded as foreign nationals by a lopsided enumeration. Our fond hope is that CAB will be passed in Rajya Sabha and an act will be enacted.

The legitimate citizens like us who were living under the ignominy of foreigner tag will get justice. We can proudly shout from the top of voice that we are Indians, he narrated with a tinge of joy.

It’s pertinent to note here that 3,987 infiltrators, all of them are from Bangladesh, continue to stay in Odisha unlawfully.

The highest number of 1,649 Bangladeshi infiltrators have been staying in coastal Kendrapara district followed by 1,112 in Paradip and Jagatsinghpur.

Of the 3,987 infiltrators, 1551 foreign nationals living in Kendrapara district had been served Quit India deportation notice on January 15, 2005. However, the deportation move has been kept on hold following intervention by the then union government. 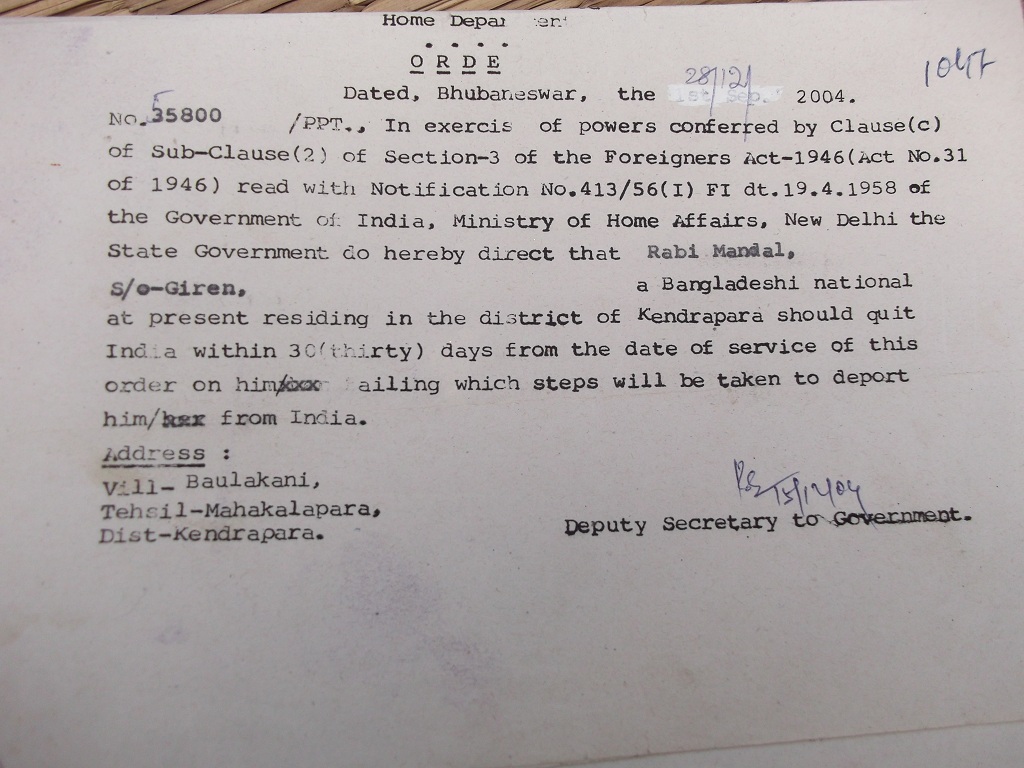 “It is  a new lease of life for people like us who were served quit India notice. We are the original inhabitants of Chabbish Praganna district of West Bengal.

My grandfather had migrated to Kendrapara in the sixties. But we have been tagged as infiltrators. All the facilities that Indian citizens get have been withdrawn from us.

We were struck off food security act beneficiaries’ list. The stigma of foreign national had made us to believe in an alien land”, said Ajay Haldar from Baulokani village.

The CAB will definitely become law shortly. Our trial and tribulation to get the citizenship tag will come to end. We are delighted, he added.

The citizenship act had left everybody living in Bengali-speaking areas of Kendrapara district in a state of animated suspense. An air of uncertainty had taken firm grip in the villages predominantly by Bengali-speaking people.

People here were glued to the television sets yesterday night and watched proceedings of Lok Sabha. CAB seeks the grant of Indian citizenship rights to Hindus who had migrated to India before December 31, 2004.

The passing of the bill has made all of us jubilant, narrated Narayan Haldar, a native of Kharinasi village.

I am an original native of West Bengal. Still, an unknown fear persisted with us that we might be branded as Bangladeshis and would be served quit India notice.

But CAB instilled a sense of optimism among all us who have migrated from West Bengal. We are glad nationality issue will not haunt the next generation as it did us in our lifetime, he concluded.