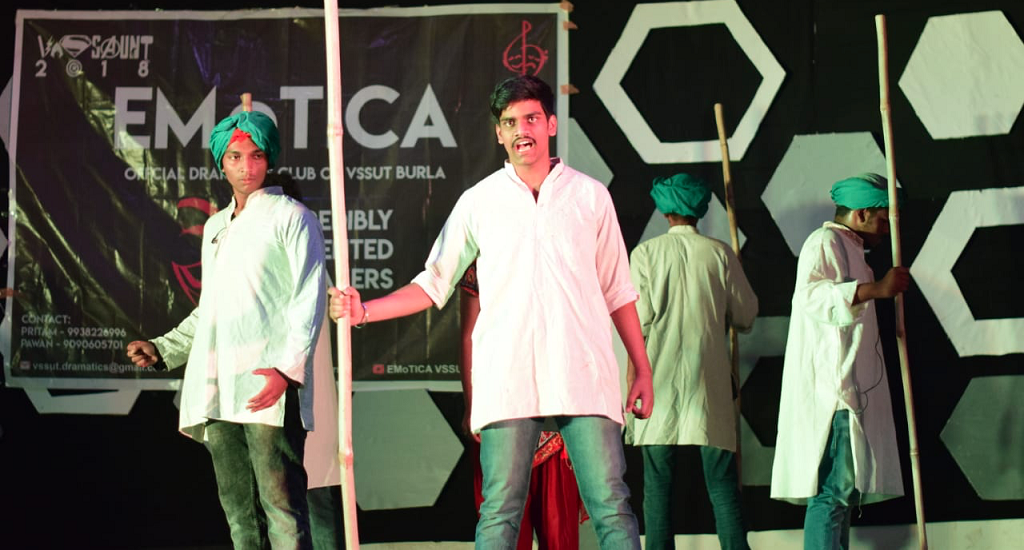 Sambalpur, Jun 01 (LocalWire) In an era on digital and always-on entertainment where movies, TV soaps, reality shows and mobile gaming are ruling the roost, dramatic societies in colleges are still keeping theatre alive.

Localwire spoke to Somya Pratik, a student of electronics and telecommunication engineering at Veer Surendra Sai University of Technology (VSSUT) Burla on how the university was encouraging students to pursue their passion and motivating them to reach out to people on social issues.

He is also the assistant secretary of the VSSUT dramatics club Emotica.

Q: Stage acting has always nurtured great talents. Do you see that happening in your college too?

A: Yes, in my college, I have seen many students who have great acting potential but did not discover it before joining EMoTICA.

They had joined the club for sake of fun but soon found their inner potential to achieve a lot in this field. Eventually, they became the finest actors in the club. Frequent roles gave them social exposure.

Q: Stage acting has never been out of date and college clubs have helped in maintaining that culture evergreen. Do you see your club working towards that?

A: In this era of cinema and web media where the outcome depends on how it is processed and edited, stage acting is really tough since its continuous and live.

Our club ensures that all modes of acting, particularly stage acting, is active and doesn’t rust with time.

We stage plays with proper script and use elements that one can relate to in this modern era. Combined with the acting skill, the plays are able to hold the audience’s interest.

Q: Acting is reflection of human emotions. Do you see the theatre help an engineer value human life and philosophy better?

A: Acting is faking reality, in which portrayal of emotions is vital. An actor has to understand the gravity of the character he plays.

The more the audience can relate to, the more they feel and enjoy the show, and engineers are no different.

Q: What kind of challenging roles have you taken up so far?
A: For an actor, experiments are important as they help in finding the elasticity or types of role one can perform. In the beginning, I was confined to sad and depressing roles. But later, I challenged myself with roles of a freedom fighter, a servant, an aspiring actor who falls in love with a sex worker, lover of lesbian, and kaal, the reaper of death. However, the most challenging role that I have played so far is that of a transgender.

Q: What are the awards won by your club?
A: Our club has performed very well in several local events. Last year, we won the first prize in nukkad natak or street-theatre at Nitrutsav, the cultural fest of NIT, Rourkela.

We also reached the finals in stage play at Mood Indigo, the cultural fest of IIT-Bombay.

Q: The society is faced with many pressing issues like sanitation, cleanliness, and women’s safety. Has your club taken up these issues and reached out to public?

A: Our club always emphasizes on social awareness. We try to show the current social issues to create awareness through street plays and nataks. By using various catchphrases and memes, we ensure that the problem and solution are conveyed to the audience.

Q: How difficult tor easy is it for engineers to pursue acting? What kind of challenges do they face?
A: Acting is something that demands a lot of dedication, particularly while taking up challenging roles that are beyond the elastic levels of acting.

However, an engineering student is loaded with assignments, projects, practical, and theses, and barely gets time.

Minimum attendance requirements and aspirations of parents adds to our woes. All this impact a potential actor and their performance.