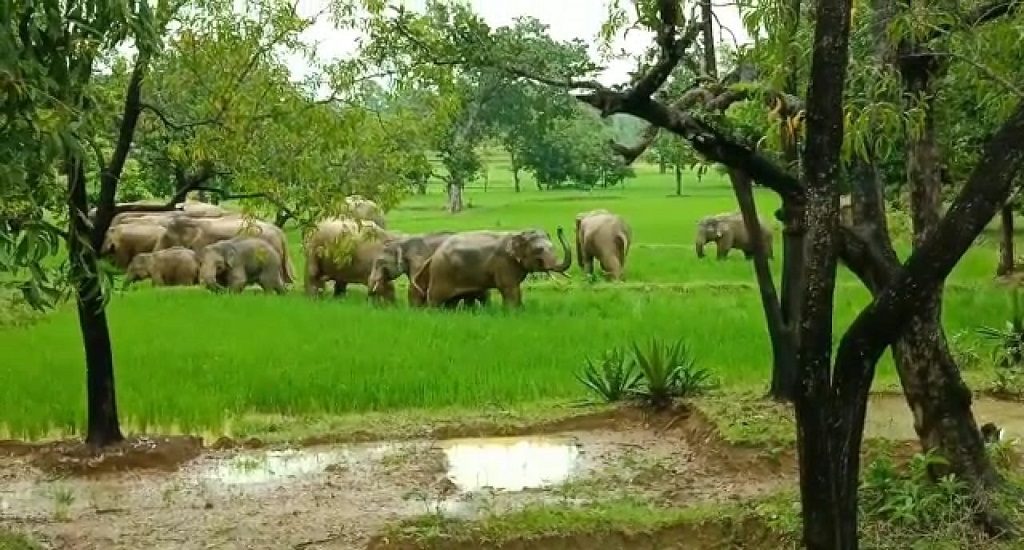 Berhampur, Jan 12 (LocalWire): The herd of migrating elephants that is ravaging crops and devouring harvested paddy in Krushna Nagar area in Digapahandi forest range have not moved an inch despite the all-out efforts of forest personnel since the last week.

Around 20 forest personnel, including elephant tracking squads have tried hard to drive the herd of elephants from Krushna Nagar area to the forest area of Ghumusara North.

Local people are in panic as the herd comprising 12 elephants, including a tusker and three calves, destroyed banana plantations, vegetable crops and are feasting on several quintals of harvested paddy stored in fields.

‘As the herd is refusing to leave, we are spending sleepless nights since the last week.

Though no human casualty has been reported, the elephants have destroyed several quintals of harvested paddy and several acres of horticulture crops,’ said a villager of Krushna Nagar.

Divisional forest officer (Berhampur) Amlan Nayak said the forest officials were keeping a check on the movement of the herd.

Elephant tracking squads and other staff, comprising around 20 to 30 personnel, are also guarding their movements.

‘The herd is camping in the area due to the availability of food and is likely to migrate to Badagarh jungle under Ghumusara North division in search of food later,’ he said.

Nayak said the railway authorities in Khurda Road have already been alerted to make slow run of trains passing through Surala, at 30 km speed per hour.

Forest officials have also alerted Southco, the power distribution company about the movement of the herd.

Forest and energy departments have decided to switch off power to the areas through which the herd will pass, sources said.

‘At the same time, we have also asked villagers not to disturb the movement of the jumbos.’ Nayak reiterated.