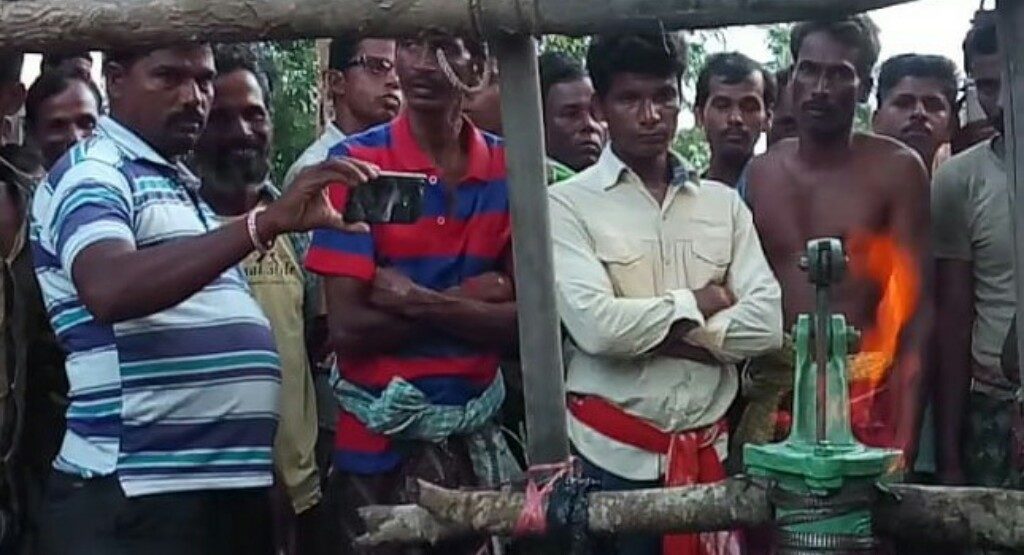 The emission of gaseous substances was reported at a newly dug out tube well in Badasubala village under Mahakalpada tehsil police station jurisdiction.

The gas emanating from the tube well caught fire following the lighting of a match stick.

As the news of the fire outbreak spread, awe-struck villagers made a beeline to catch glimpse of the ‘mysterious’ tube well.

Fire brigade personnel rushed to the spot to douse the fire.

“The underground oil pipeline is traversing through Mahakalpada.

We inspected the site to ascertain whether there was a leak in the pipelines.

We found the pipeline intact with no leakage point.

The fire emanating from the tube well might be natural gas substances,” an IOC official said.

“The fire emanated from the tube well when ceremonial puja ritual was being performed before the use of water from it.

The lighting of an incense stick led to the fire.

The fire was on a lesser scale. However pungent smell pervaded the air leaving the people in a state of panic,” Narayan Pradhan, on whose plot the well was dug, said.

“The fire personnel have assured us not to worry.

We have been told that it’s a thin source of natural gas,” he informed.

According to the district fire officials, the volume of gas locked up in the rocky layer beneath the tube-wells water source was limited.

“The emission of gas from the village this time might also be of limited scale.

We are in touch with competent authorities from the Geological Survey of India.

They have been requested to examine the source of gas from the well,” fire officials stated.