The central and state pollution boards have guidelines to guard against river pollution but by violating all norms, they dumped the non-biodegradable materials in the river. ‘Prior to immersion, flowers, clothes and decorating materials should be removed as many idols are made of plaster of paris that takes longer to dissolve.

It also reduces the oxygen level in the water,’ said Hemant Rout an environmentalist of Kendrapara.

The authorities provided two dedicated immersion points with synthetic liners at the bottom of artificial water bodies near the river Govari but many puja organizers immersed the deities in the river water, said an official of Kendrapara municipality. 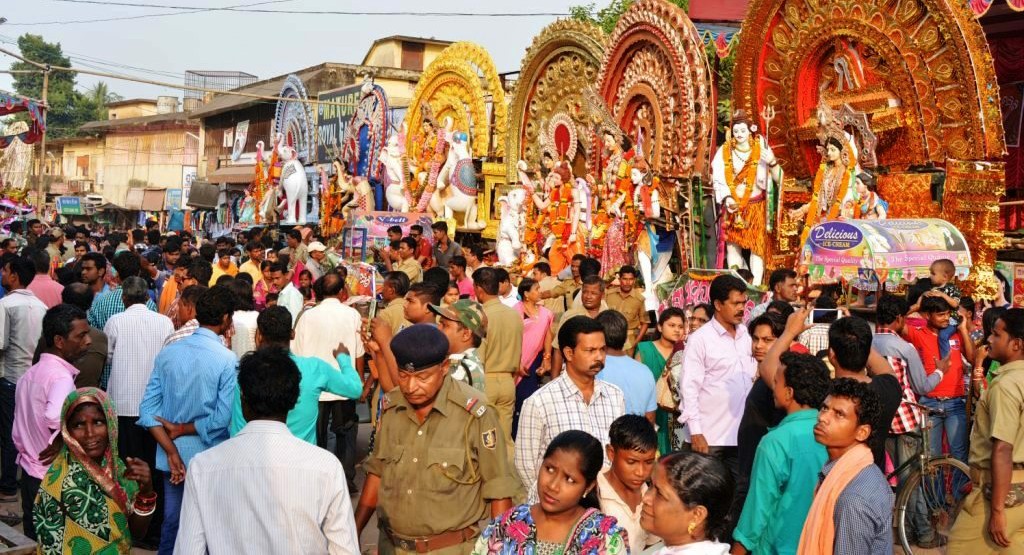 The melan or traditional get together of the deities was held at the old Bus-stand before the processions proceeded to the Govari river ghat to immerse the idols of Goddess Ma Laxmi.

With the weather being pleasant throughout the Puja days, large number of people came out to witness the ceremony.

Most Kendrapara roads are lit up during the Gajalaxmi puja. Puja organizers took out grand procession with dazzling illuminations and stunning decorations that symbolized the festive spirit during the puja which is unique of the ceremony in Kendrapada from Sunday afternoon which continued till Monday night.

Elaborate security arrangements with 26 platoons of police were deployed to check law and order situation.

The authorities installed 36 CCTV cameras in Kendrapada town at 12 important places. We were also depending on the footage of privately-installed CCTV cameras at the market complexes, petrol pumps, hotels, shops, educational institutions and bank in the town, said Rajiv Lochan Panda the Sub- Divisional Police Officer of Kendrapara.