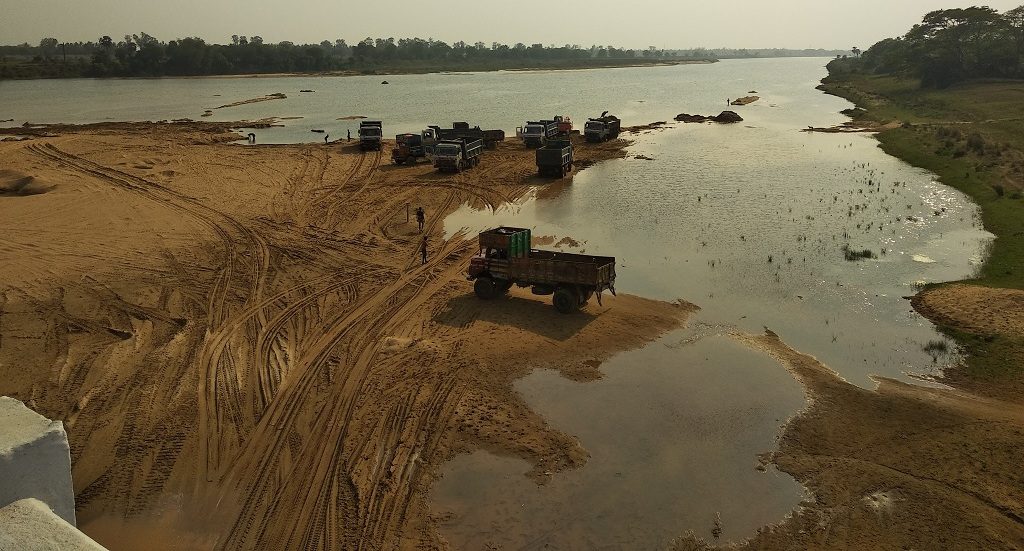 Kendrapara, Oct 18 (LocalWire): In a blow to the sand mafias, the principal bench of National Green Tribunal (NGT), New Delhi on 14 October restrained sand mining in the river Bramahani in Kendrapara district without prior environment clearance.

NGT also directed the chief secretary of Odisha to take appropriate action against the district magistrate and superintendent of police, Kendrapada, for having failed to discharge their responsibilities and filing incorrect affidavit before the NGT.

A bench headed by Justice SP Wangdi, Judicial Member and Dr SS Garbyal, the expert member, directed the state government, district collector of Kendrapada and tehasildar of Pattamundai and member secretary of state environment impact assessment authority Odisha, to take necessary action against the people who have been illegally mining sand without obtaining any environment clearance from the authorities.

NGT passed this order acting on the petition filed by environmentalist Manoranjan Pradhan of Belatala village and others.

The petitioners in their petition before the NGT alleged that many people were illegally and indiscriminately mining sand in the Bramahani river bed at Charenarendrapur, Alva, Nimapur and Srirampur areas, violating the Environment (Protection) Act, 1986 and the order of the Supreme Court.

The petitioners also stated that illegal sand mining is disturbing the natural sand dunes and threatening the river embankment.

The petitioners further stated that the 480-kilometer-long Brahmani River is the second largest seasonal river in the state after Mahanadi. It was formed by the confluence of the Sankh and Koel rivers and flows through Sundargarh, Kendujhar, Dhenkanal, Kendrapara, Cuttack and Jajpur districts.

It is the life-line of the people of these districts. Lakhs of people depend on water from the river Bramahani for agricultural purpose. The indiscriminate sand mining in several places threatened the embankment and changed the course of the river.

Large-scale sand mining also disturbed the flow pattern of the river and have now threatened the embankments at many places. The natural sand dunes have also been disturbed due to sand mining.

The illegal sand mining in Brahmani river bed caused serious environmental degradation and ecological impact, and no environmental impact assessment (EIA) has ever taken place in areas earmarked for mining especially on the river beds.

Over the years river and riparian ecology have been affected by the alarming rate of unrestricted sand mining that damage the ecosystem of rivers and the safety of bridges, weakening river beds, destructing natural habitats of organisms living on the river beds, breeding and migration, spells disaster for the conservation of many bird species and the associated riparian habitat.

Earlier, NGT had directed the district magistrate, SP, state environment impact assessment authority and the state pollution control board to investigate the matter by forming a joint committee and to submit a report after visiting the area.

In the report, the joint committee stated that sand is being lifted from a private land and that the sand extracted from the riverbed has not caused any obstruction to the free flow of the river.

The tehasildar of Pattamundai gave permission to Virendra Pal Singh to lift sand and earth at village Charenarendrapur and Alva over a private land near the river Bramahani.

The joint committee in its report admitted that there is no environmental clearance obtained from the competent authority for excavating sand and soil from the riverbed of Bramahani at Charenarendrapur, Alva, Nimapur, Chaudakulat and Srirampur under Pattamundai Tahasil for which the authorities stopped sand-mining in these areas.