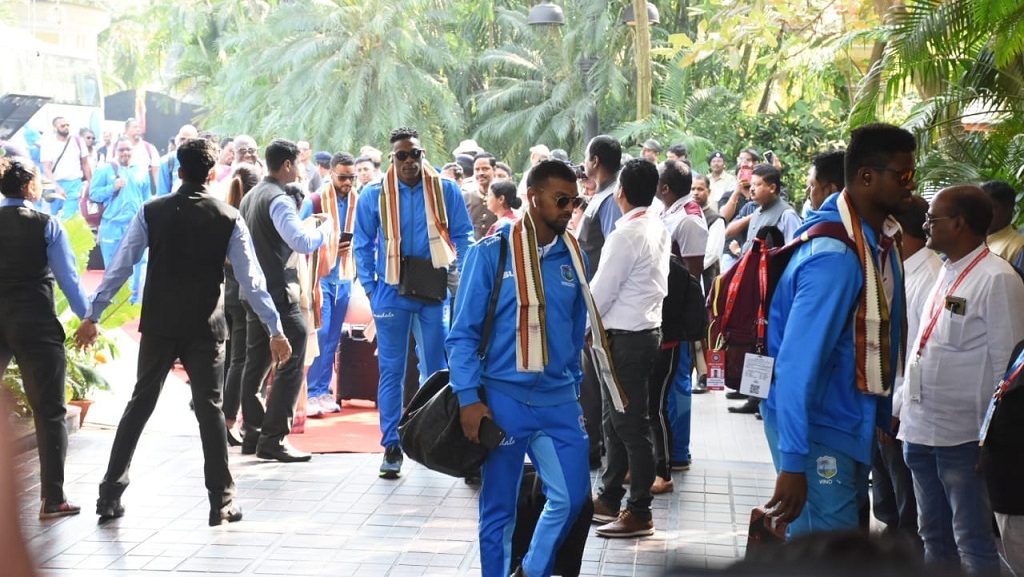 Bhubaneswar, December 19 (LocalWire) : India and the West Indies teams reached Bhubaneswar from Visakhapatnam on Thursday for the third and final one-day international (ODI) match to be played at Barabati Sadium at Cuttack on December 22 (Sunday).

The teams were escorted in special buses from the Biju Patnaik International Airport here to Hotel Mayfare in the city with heavy security by armed police force even as a large number of people were seen standing on both sides of the sprawling roads to see their favourite players.

A total of 85 rooms have been reserved in the hotel for the players and officials and eight-tier security arrangements have been made for them inside the hotel premises, the sources said.

The Commissionerate Police had made elaborate security arrangements for security of both the teams, who will proceed to Barabati Stadium at Cuttack, a distance of about 30 km, tomorrow.

Even as hundreds of cricket fans have started gathering in front of the hotel to see their favourite players, tight security measures in the hotel and on way up to Barabati stadium for security of the teams as both the teams will go for net practice on Friday through NH-5 escorted by Special Commandos. While West Indies squad will go at 9 am, India will go for practice at around 1 pm.

However, taking into account the heavy rush of people at all counters, it appears that all tickets will be exhausted in the first day itself; sources said adding police and private security personnel have been deployed at each counter to ensure that the tickets are not sold out on black market. Besides, the Cantonment Police has made elaborate arrangements to regulate the heavy rush of people near the ticket counters. The Odisha Cricket Association (OCA) has mandated that each person will be allowed to purchase a maximum of two tickets by showing his/her identify card.

A police camp has been set up in front of the Hotel where the teams are putting up. Heavy security arrangements have been made for controlling and checking all roads leading up to Barabati stadium. Apart from this, police officers along with armed police have been deployed in the inner and outer perimeter of the stadium.

Sources said at least 63 platoons of the police force and a Rapid Action Force contingent comprising 300 officers have been deployed to maintain law and order situation till the high profile match ends.

The Police Commissioner has also requested the spectators to ensure that the match should be conducted smoothly.

Barabati Stadium will host an international cricket match after a gap of about two years with the last one played at the stadium was a T20 International between India and Sri Lanka on December 20, 2017 which India had won by 93 runs.