Jajpur, April 14 (LocalWire): Keeping a 400-year-old tradition alive, around 15000 devotes on Sunday fished out the idol of Narayan Goswami from a pond adjoining the temple during Pana Sankranti in village Singhpur of Jajpur district.

‘Since 1569, each year devotees fetch the three-foot-high granite idol from the pond and worship it for three days in the Narayan temple in Singhpur. This religious tradition has been going on for more than 400 years.

As per tradition, Rani Aparna Dhir Singh Bharadwaj of Gadamadhupur first worships the deity after its emergence from the pond,’ said Narahari Pati, a priest of the temple. 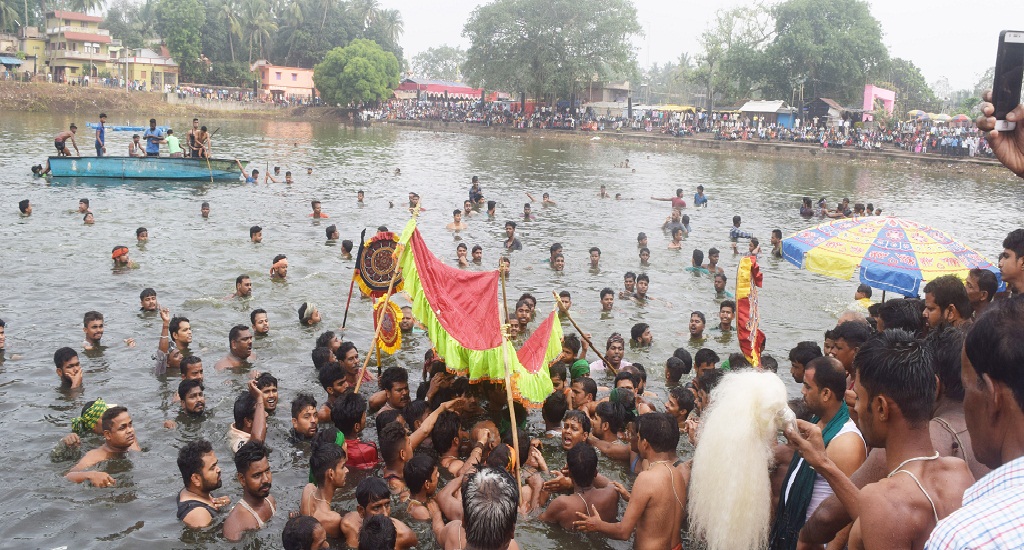 Around 15,000 devotees thronged the temple to offer prayers to their beloved deity. The stone idol gathers moss and the priests clean the deity and bath it with milk and curd,’ added Pati.

The pedestal remains empty inside the Narayan temple but for these three days. On the fourth day, the priests and devotees immerse the deity back in the pond where it resides till the next year.

Large number of devotees scouted the pond for two hours in search of the deity and managed to fish it out. Fire brigade personnel were on alert to avert any mishap.

‘According to legend, in the 16th century, Bengal governor Suleiman Kirrani’s general Kalachand Roy or Kala Pahad fell in love with the general’s daughter and they married on the condition of him converting to Islam.

But after the wedding, Kala Pahad repented his decision and went to Puri to convert back to Hinduism. But the orthodox pandas of Puri Jagannath temple refused to accept him as a Hindu.

Hurt and embarrassed, Kalachand embraced his new faith with passion and in tune with the dictates of Islam, he started believing idol worship a heathen activity and destroyed all Hindu temples in the region.

To take revenge against the priests of Odisha, Kalapahad invaded Odisha in 1568. In 1569, he came to Jajpur to destroy the temples.

The priests of Singhpur and the local king, to save the sanctity of the temple, took away the deity, Narayan Goswami, and hid his idol in a pond,’ explained another priest of the temple, Prakash Pati.

A few days later, the Lord visited the king of Madhupurgarh in his dream and instructed him to take out the idol from the water and worship it. Since then, the idol is taken out of Singhapur pond for three days, added Pati.

‘As per the age-old tradition, after three days, the villagers hide the deity again in the pond,’ he said.