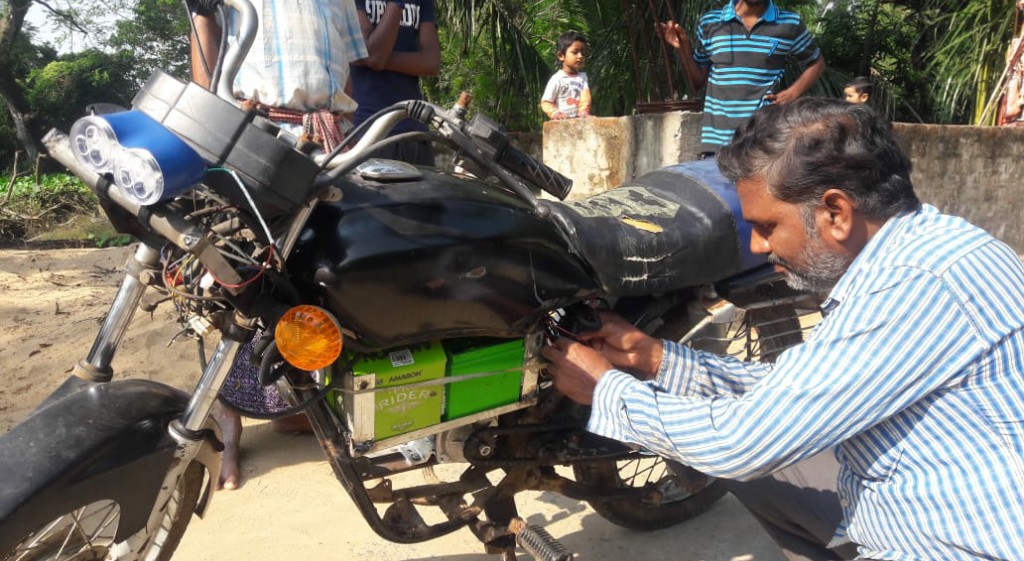 Jagatsinghpur, November 21 (LocalWire): An ITI-trained mechanic in Naugaon has come out with a solution to refurbish and convert old polluting motorbikes into e-bikes that can run 40 kilometres on a single charge.

According to Benapada-resident Pradip Mohapatra, who runs a window grill and almirah shop at Mundalo Bazaar in Nuagaon, the technology uses four 12 volt batteries and hence is completely environment-friendly as it leads to zero-emission by the two-wheelers.

The 45-year-old innovator further informed that the old two-wheelers fitted with batteries take almost one hour to get re-charged, attain a maximum speed of 50 km/hour, and easily take the load of a pillion rider.

“The total investment of Rs 20,000 is needed to convert an old motorbike into an environment-friendly two-wheeler.

The cost includes four 12-volt batteries and other accessories,” he said, adding that with the success of the technology in two-wheelers, he now wants to retrofit old cars with batteries so that they can run without causing pollution and reduce fuel consumption.

Mohapatra says that it took him twelve years to realise his dream of contributing to society by helping in reducing the level of vehicular pollution, particularly that from old motorbikes that spew toxic gasses and are an environmental hazard.
.
However, he pointed out that due to the lack of adequate financial resources, his innovation is yet to be tested by any research institution or agency.

“It may not be feasible to run these retrofitted two-wheelers on the road without the approval of the authorities, but the interest shown by locals, who have lined up to use the battery-fitted vehicle, is a motivation for me to keep working on it,” he stated.

According to several locals, while Mohapatra’s innovation is praiseworthy, people are reluctant to use the battery-fitted motorbikes on the road unless the transport department approves it.

“The innovative idea of the mechanic from Naugaon is good only for an experiment, but people cannot drive the motorbike on the road because the transport department cannot give permission for it without the approval of the state government or any research institute,” the regional transport officer Bijay Kumar Nayak said.