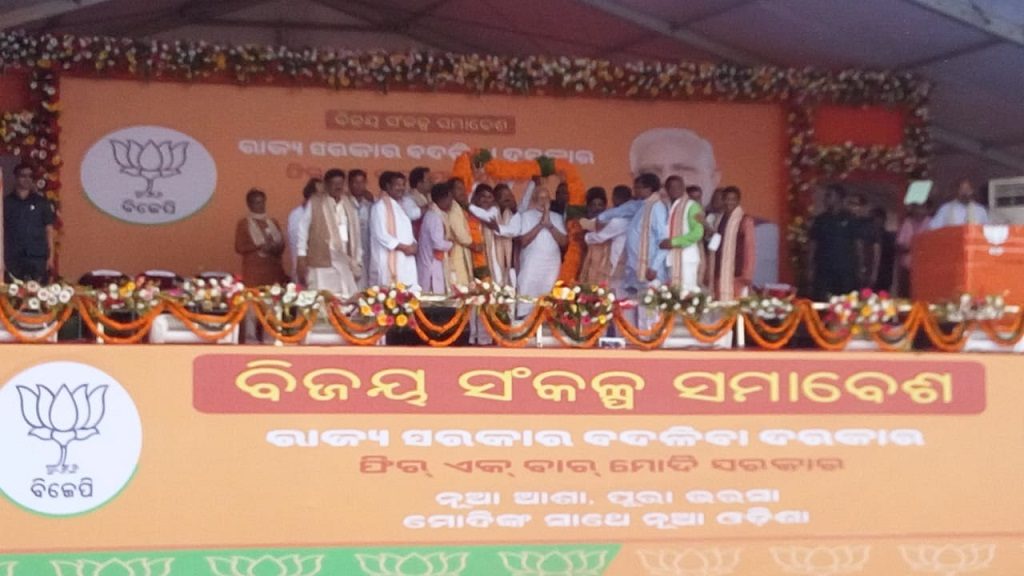 Modi called on stage all the BJP candidates from Koraput and Nabrangpur Lok Sabha and Assembly constituencies and began his address with ‘Jay Jagannath’ and asking the crowd in Odia ‘Apana Maane Kemiti Achhanti?’ which was welcomed with loud cheer from the supporters.

The PM launched a scathing attack on Congress and the ruling Biju Janata Dal (BJD) for keeping Odisha backward for decades.

Urging the people to vote for BJP during the Vijay Sankalp Samabesh, Modi said ‘Now is the time to punish the Congress and the BJD who were given ample time to develop the state in which they failed miserably. I believe that the people of Odisha should vote for BJP’s double engine government, both in the state and the Centre so as to bring all round development at much faster pace.’

Modi took a swipe at the BJD for failing to utilise the funds accumulated under the district mineral fund and also refusing to be part of the Centre’s Ayushman Yojana and PM-Kisan Yojana.

‘I want to ask, should you not punish this government. Do you not deserve a change for a better Odisha?’ he questioned referring to the involvement of BJD leaders in chit fund and other scams. ‘But Chowkidar Sajag Achhi (Chowkidar is alert) for your safety and wellbeing,’ he added.

He tried to woo the voters by saying, ‘PM-Kisan will benefit crores of farmers in the country but there’s not a single beneficiary from Odisha as there is no support from the state. It’s time to say good bye to this anti-people government. Only BJP can bring development here.’

Responding to Modi’s allegations, BJD’s Barabati-Cuttack MLA, Debasish Samantaray said, ‘The Centre has praised Odisha’s all around development in the past. CM Naveen Patnaik has introduced Biju Swasthya Kalyan Yojana which is better than Centre’s Ayushman Bharat scheme. The Centre has copied our Kalia scheme.’

Earlier, Modi had tweeted in Odia, that the ruling BJD has failed to meet the aspirations of the people while the Congress was unable to emerge as a credible opposition. ‘Odisha deserves a good government and the BJP will provide it’ he tweeted.

Modi is scheduled to address another election meeting at Kalahandi on 2 April.