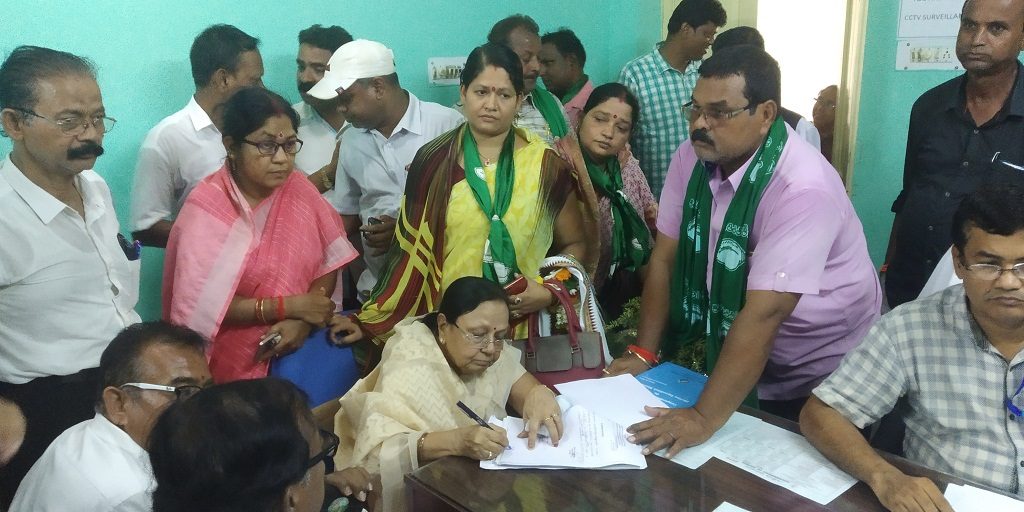 Sabitri, accompanied by a large number of BJD supporters reached the Collector’s office at Kendrapara to file nomination papers for the polls slated on 19 May.

In a bid to cash in on the sympathy wave, BJD nominated his widow, said Anambandhu Dhal, a senior party leader and the chairman of Kendrapada block.

Sabitri will fight against BJP’s Bijay Mohapatra and Congress candidate Jayant Mohanty who claimed that there was no sympathy wave for the ruling BJD after the death of six-time MLA Bedaprakash.

Addressing the media here, Mohapatra alleged that BJD had hatched a conspiracy to countermand the poll by forcing Bedaprakash to file for nominations when he was in a moribund condition.

‘A small percentage of voters might get carried away by sympathy but by and large, there is no such trend among the voters, who are determined to elect Mohapatra from Patkura,’ said Duyrodhan Sahoo, president of the district unit of BJP.

But Sabitri Agrawalla is confident of taking her husband’s legacy forward. She is counting on her husband’s popularity to get her into the state Assembly from Patkura. ‘My husband developed a bond with his constituency for more than 40 years. He did many developmental works here. I would like to continue the legacy of my husband,’ said Sabitri.

BJD is planning to go all out with the chief minister and other senior leaders campaigning for Sabitri.