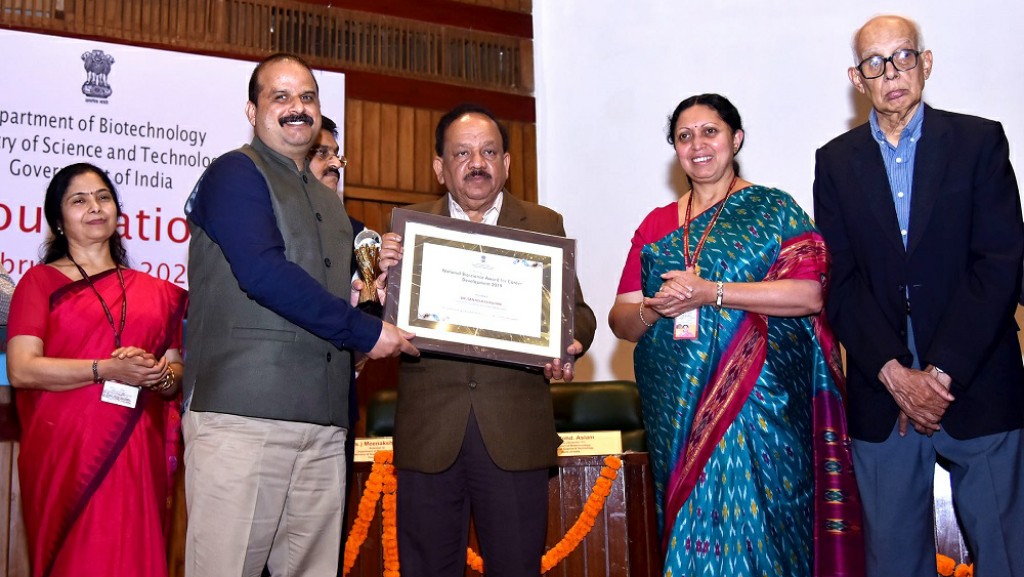 Bhubaneswar, March 2(LocalWire): A scientist working with the Institute of Life Sciences (ILS) in the state capital and researching on important health issues has been awarded by Union Minister for Science and Technology Harsh Vardhan in New Delhi for his valuable contributions in the field of science and technology.

The researcher identified as Dr Santosh Chauhan was awarded the Dr S Ramachndran National Bio-sciences Award for career development by the Departamnt of Biotechnology of the Science and Technology Ministry.

National Bio-science Awards For Career Development are conferred in recognition of outstanding contributions of scientists below 45 years of age who are engaged in basic and applied research in Biological Sciences.

The award recognizes the significant contributions made by scientists in their respective domain research areas with potential for product and technology development.

Dr Chauhan is known for his research works in the sector of autophagy (body’s way of cleaning out damaged cells, in order to regenerate newer, healthier cells) and inflammation in diagnostic therapy.

His research and studies are said to be important in understanding the diseases triggered by protein aggregates like Alzheimer, Parkinson’s Disease and others.

In his laboratory, the scientist is working to decipher molecular mechanisms by which autophagy and inflammation play a key role in controlling some dreaded diseases.

His researches are likely to open new vaults on new treatments for cancer and infectious diseases.

The scientist was earlier was awarded EMBO Global Young Investigator Award besides bagging award for the Merk Young Scientists Award.

The EMBO Global Investigator Network was launched in 2019 with the aim to support the next generation of scientific leaders that have started their laboratories in India and some other selected countries.

The programme provides the selected scientists with opportunities to interact with other researchers in the same region and life scientists based in Europe.

On the other side, Merck Young Scientist Award offers career push and worthwhile incentives to India’s Young Researchers.