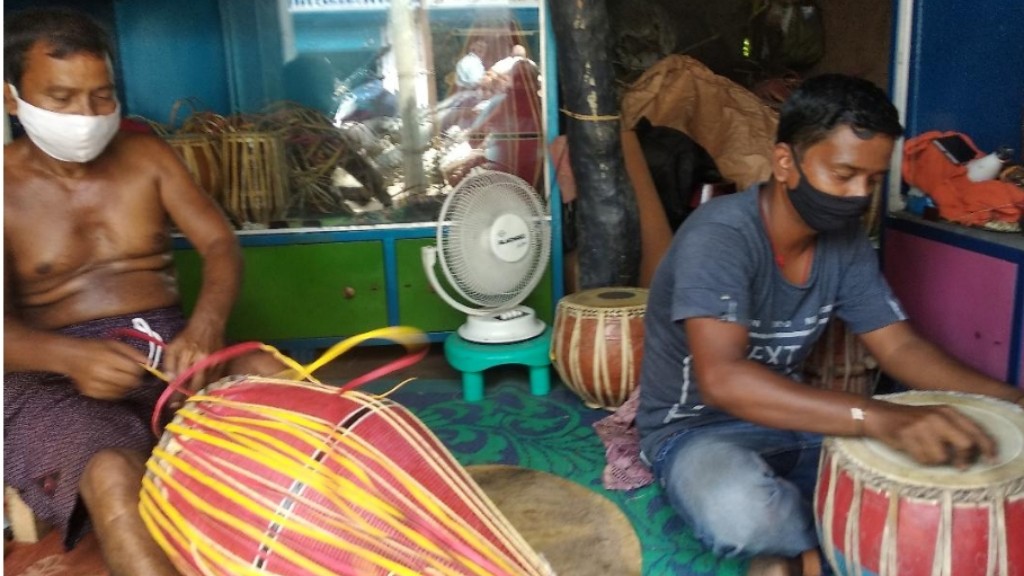 Kendrapara, September 7 (LocalWire): Around 200 traditional musical instrument makers of Kendrapara district and its nearby areas are staring at huge losses due to the uncertainty over Durga Puja this year and the ban on band parties due to COVID-19.

After the authorities banned the Ganesh Puja on 22nd August and Viswakarma Puja on 16th September, the specter of uncertainty looms over musical instrument makers as they believe Durga Puja (22nd October) and Laxmi Puja (14th November) may not be observed in public places this year due to COVID-19.

The Puja Committees have also been directed by the authorities not to start any advance preparations for the celebration of Durga Puja, for which the musical instrument makers are also feeling the pinch.

“We are all now oscillating between despair and confusion due to uncertainty over Durga Puja.

The authorities have decided not to allow public celebration of Durga Puja in Cuttack and other places this year in view of the COVID-19 health pandemic.

The officials also banned immersion procession of the deities for which our business is all set to take a nose dive this year,” said Ganesh Das, 55, a musical instrument maker of Madhiala village within Kendrapara town.

“All my family members are involved in the art of making mrudanga, tabla, pakhoj, dhola, flute, etc.

Each year, we used to be busy in our work four to six months before the Durga Puja and Laxmi Puja to meet the huge demand from the puja committees.

However, with the celebration of the puja under question, the artisans are confused about whether or not to make the instruments this year,” added Ganesh Das while sitting in his workshop at Madhiala.

Few marriages are taking place, and that too without any band party as the authorities have banned marriage processions.

The state government has also closed all the temples and other religious institutions for which they are not interested in purchasing any musical instruments from us.

COVID-19 has struck a lethal blow to our age-old occupation,” added Badal Das.