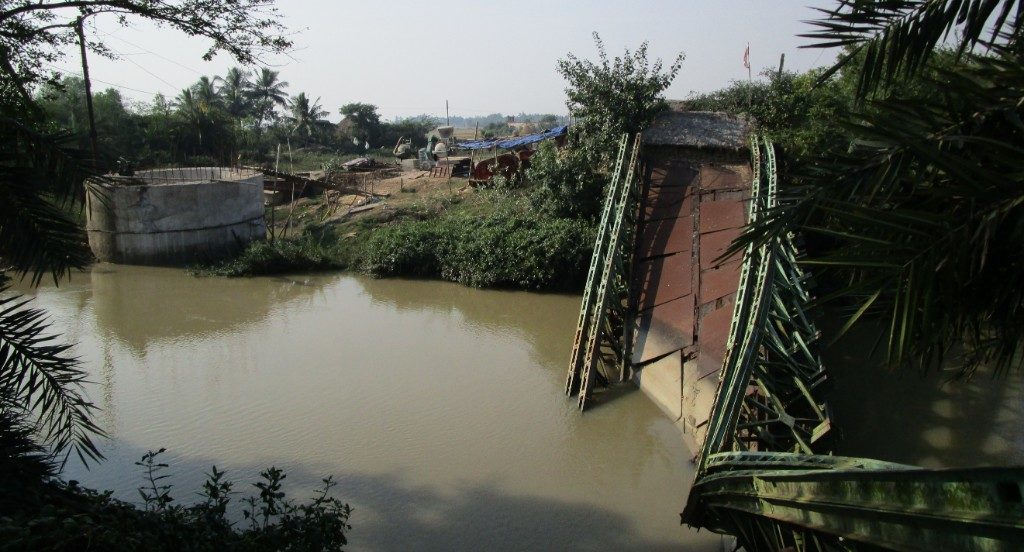 Kendrapara, July 8 (LocalWire): The construction work of a 50-metre-long bridge over the crocodile-infested Hansua river in Tantiapala village under Mahakalapada block in Kendrapara is still to be completed even after five years.

‘About six iron plates of the Bailey bridge at Tantiapala village got rusted since long but the authorities failed to replace them and the 37-year-old bridge collapsed in 2014 after a stone-laden truck was crossing it.

The authorities then announced to rebuild a new bridge within six months but the construction is still moving at a snail’s pace and we have been remained cut off from the main land ever since,’ complained Ranjan Sethi of Bhopala village.

‘We expected the construction to be completed in time keeping in mind the importance of the bridge,’ added Sethi.

‘Every day, hundreds of villagers are faced the daunting task of crossing the river in rickety country boats and the only bamboo bridge. The old bridge was also used by tourists who visit the Barunei river mouth, mangrove forest and Barunei beach within Gahiramatha marine sanctuary as the lternative route takes two-and-a-half-hours more,’ Prasant Khanduala of Barahapur said.

‘Students from the other side are also facing problems to reach the high school at Barahapur,’ said Hemant Rout, retired head master of Barahapur high school.

Nalinikanta Senapati, the executive engineer of rural development division of Kendrapara, said, ‘After the collapse of the Bailey bridge at Tantiapala, we entrusted a contractor to build another bridge within four months at the cost of Rs three crores. Out of three well foundations of the bridge, one of the wells tilted during construction last year and delayed the construction. We will complete the bridge work within six months after building a new well.’