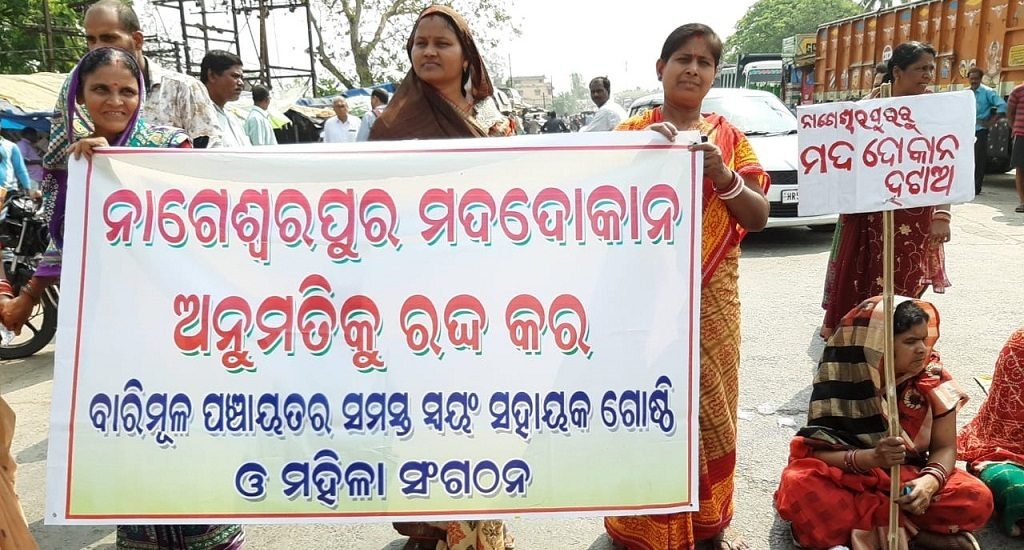 Kendrapara, March 27 (LocalWire): Women of all ages sat on a dharna demanding the closure of a licensed foreign liquor shop at Nageswarpur village and blocked the Kendrapada-Cuttack state highway for more than two hours disrupting traffic severely.

‘The main road at Tinimuhani Chack was blocked by hundreds of women who were joined by several bystanders including men, who were impressed by the intensity of the protest,’ said Ranjita Barik of Barimula.

‘We had earlier submitted memorandums to the district collector, district superintendent of police and excise officials not to open liquor shop in the village. But the authorities did not pay any heed to our pleas and we had no other resort but to block the road,’ said Ranju Mallick, a villager. ‘This sitdown was definitely a positive movement against liquor addiction, which has eaten into the resources of poor villagers, who are mostly farm labourers,’ said Sasmita Behera of Nageswarapur.

‘Many young men are already hard-core addicts and wasting substantial part of their earnings on liquor, resulting in suffering and deprivation of the whole family. The villagers including women and children, thus, decided to oppose the selling of liquor in the village,’ said activist Lata Behera.

Several students supported the move of the women to oppose the opening of the liquor shop.

Women activists including many members of self-help groups also criticized the decision of the government to open more liquor shops in the districtas it will ruin many families. ‘We recently chalked out plans to forcefully close many liquor shops in the rural areas,’ said Pinki Mallick, a women’s leader.

Unchecked flow of liquor and narcotics wrecked the lives of the people which also led to the rise of anti-social activities in the district. Drunkards and drug-addicts have been harassing common people. Police seem to be hand in glove with the illicit traders as in several places liquor is sold near the police stations, added Mallick.

Sanjay Mishra, the sub- Collector of Kendrapara said, ‘We assured the agitating women that necessary steps will be taken to shift the liquor shop from the village after the elections.’